At last, I have decided to write up about the race last week. The Island Challenge is an annual race around the island. This year, nearly 200 swimmers from all over the world competed. We were very lucky with the weather on the day, after the worst summer in recorded history, we got a beautiful day and the water was at it's warmest in over a year. Everyone was in a good mood and decided to turn up on time and the whole event ran very smoothly. 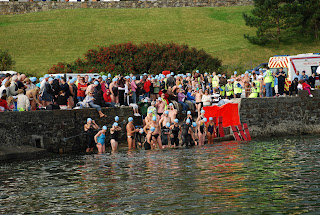 As the first group lined up along the slipway, the tension was high, everyone had set there eyes on a suitable rival and nobody could wait until the klaxon went. As I dived into the water, I got an enormous shock, I hadn't swam in more than 13 degrees in the last month. I immediately set about my strategy of taking the shortest course possible and swimming as if I were doing a 1500m in the pool.
Once we had rounded the first corner, there was nobody else in sight, Chris Bryan from Ennis was way up in front and everyone else was falling behind. It was my job to make sure that nobody passed me from here on. The whole lap seemed to just fly by. Of course I nearly cut myself to shreds going over the rocks on the far corner. When I saw the Pink House out of my right goggle, it was time to sprint. 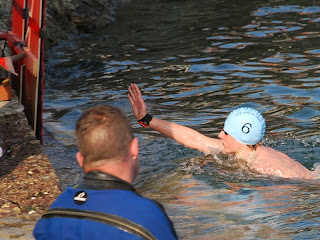 I was lined up with the finish and sprinted like hell for 150m. By then I realised that I was slightly off course, but just a quick adjustment and I went in for the finish. Once again I nearly injured myself while trying to reach up to the touch pads. I was so paranoid that the timing chip didn't register, but they managed to convince me that it did. I took a look around and was delighted to see that I came in second.

My mentor and biggest rival, Ned Denison, was well behind me, mission accomplished. As usual the atmosphere afterwards was fantastic. This year the afters were held in the Trident Hotel in Kinsale. This was great because it meant that we could have a meal and then head up to the function room for the prize giving. I was very happy with my lovely Kinsale Crystal bowl and there was an added bonus, I received a nomination for the Mike Harris Trophy. This is awarded to a person who has made a valuable contribution to open-water swimming in Cork. I felt really honoured to be nominated for such a prize. 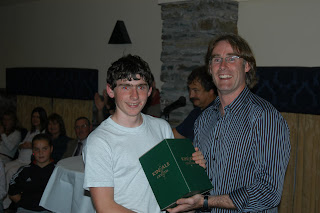 All in all, it was a fantastic day out. Hopefully all of the Island Challenges to come will be as good as this one!
Posted by Owen O'Keefe at 20:09