Lizard Point is the southern-most point on mainland Britain. None of the official swimming bodies have any record of anyone swimming around the point. So we can assume that this swim has never been done before, there is a good reason for this. A rocky reef extends for one mile off the coast of the headland, with only one narrow channel just below the cliff. This is an very treachorous part of Cornwall's rugged coastline, there are countless shipwrecks litterd along the coast. On Saturday 26th July, I became the first person to attempt the five mile swim from Kynance Cove on the western side to Cadgwith on the more sheltered eastern side.

When I started the swim at 7:40 that morning, conditions were perfect. The sea was calm, there was only a light breeze, the sun was shining and the water was about fifteen degrees celcius. However, when we reached the rocks around Lizard Point, a thick fog began to drift in from the 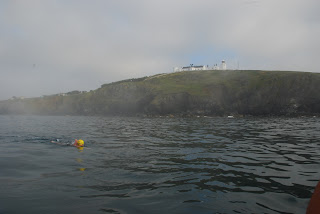 east. Because we had arranged to swim on a flowing tide, we quickly surged through the Vellan-Drang Channel near the old Lifeboat station at Polpeer. It was amazing to see the famous lighthouse above us as we rounded Bass Point, our half way mark. Then the fog became very thick and we could not sea the coast, luckily, we had arranged to meet a second boat. He then went between us and the cliff so we could get our bearings. Suddenly a fin appeared out of the fog, imaginations ran wild on the support boat but it turned out to be a sun-fish. When Ilooked at my watch I estimated that I had about a mile left to swim, so I began to pick up the pace a little. Just then, my Dad shouted, "half a mile", and I began to hug the cliff and sprint. When the cliff fell into the narrow entrance to Cadgwith Cove I knew I was finished. I left the water 1hr 59mins 24secs after starting. There were a few people at the finish, my Grandad, Mam, brother, sister and four local people who were friends. Chris Maunder ran down the beach and rapped me in three hot towels, gave me a cup of tea and a plate of fresh crab sandwiches. What a waay to start the morning.


Through the swim we raised just over GB£1,200 for the local RNLI who are trying to buy a new lifeboat. But, without the help of Coxswain Phillip Burgess and Crewman Nick 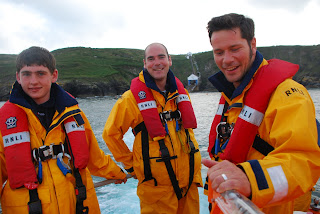 Pryor, the swim would have been impossible. Because we raised so much money from the swim, Phil said in a broad Cornish accent, "Come down 'ere Kilcobben o' Tuesday n' we'll take you out on a launch". So on Tuesday myself, my Dad, my Uncle John and his friend Stefan went to the Lifeboat station and we took part in a full launch and training operation with the Lifeboat. It was an amazing expeirence. On the way back, it was quite stormy so we got the full treatment of bad weather and heavy seas. The crew on-board were very friendly and even explained to us everything that was going on during the excercise. When we got back from Cornwall I sent away the application forms for recognition of the swim to the BLDSA, so all going well, by the end of this year the course will be made official and my swim will be recognised.
Posted by Owen O'Keefe at 14:22