Sorry about the delay, a full two weeks after the swim I finally decide to put it up on the blog! On Thursday 28th August I became the second [and fastest] person ever to swim from Crosshaven to Blackrock in Cork Harbour. At a total distance of nearly 20km, it is my longest swim to date, and a great learning experience. Here's what happened:

On Sunday evening I got a call from Ned. He asked me if I would like to do a long swim in Cork Harbour on Thursday. I asked him how long, he replied "Oh 10 miles, actually 12, maybe 13". I reluctantly accepted his offer and at 09:06 on Thursday morning I was in the water at Crosshaven.

At the start of the swim the air was mild, there was a light breeze and the water was just over 15 degrees celcius. The water felt colder than it actually was, but the sea was very calm which allowed me to turn my arms over quickly to warm up. The first part of the swim exiting Crosshaven dragged alot. I was trying to pick out landmarks around the Harbour to judge my progress but it was difficult due to the vast area. 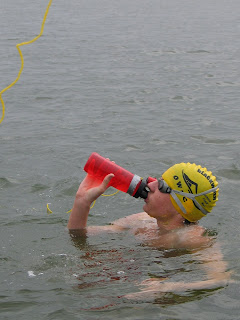 
By 10:20 we had reached the lighthouse on stilts infront of the Port of Cork Offices. Five minutes later, I had my second feed (same as the first), by looking around I could see we were past Spike Island and approaching Cóbh. I had a mental image of the course so I knew that we were about one quarter of the way there. While having the feed, one of the Irish Navy's new ships steamed past us. I got a reassuring look from the crew then ploughed on. After this I really started to settle into my pace and become comfortable in the water.

After 2hrs in the water my stroke rate was still at a steady 64 with a strong pull. I was happy when we passed Cóbh Cathedral because the whole town seemed to go on for ever. Then a dregder passed at close range, we were rocked a bit by it's wake and it left a fairly cloudy trail in the water. I had another feed. The sun came out and I was feeling strong so kept going.

The wind started to pick up a bit but it didn't make much difference. It was nice passing the quay where the Titanic docked for the last time and the Irish Naval College on Hawlbowline. At 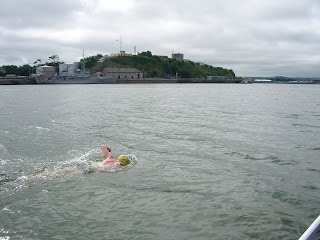 11:50 I had another feed, this time topped off with hot water. Ned told me that an e-mail went out from Rob Bohane that he was watching from his office window in Pfizer's. This gave me great encouragement. The sun was strong and the boat crew looked to be enjoying themselves, we couldn't have asked for a better day.

It was a long corner around to the Cork Dockyards. But it was worth the wait, at Monkstown I could see Dave waving our Munster flag to his Dad on the pier. At 12:20, I had another High5 topped hot, and a wine gum. Twenty minutes later, I had a banana while waiting for the Rushbrooke Ferry to pass. My stroke was starting to weaken a bit but there was a strong tide in our favour.

At 13:20, I had two sours washed down by another warm High5. I was feeling a bit cold but I could hear my family and Nick Mulcahy cheering from the shore and that kept me going. As we turned the corner after Passage West, the vast expanse of Lough Mahon opened up before us. My heart sunk when I saw all that water infront of me. The boat started to push ahead and that forced me to pick up the pace and warm up.

Then Ned got into the water and swam next to me for a while. It was good to have some company in the water. When Ned finished I had another hot feed, I needed it. Although the sun was warm, I was starting to get cold from tiredness. Blackrock Castle was clearly visible ahead. It was difficult getting to there because we had lost any assistance from the tide.

I finally reached the Castle at 14:20, the following 23 minutes would be pure mental and physical torture. I was totally drained, my hand was entering the water infront and coming out behind, but not acheiving much in between. The current was coming out from the river and I was in by the bank fighting to make progress. The finish looked close, but it never got any closer. The boat had docked and I just threw my arms infront of me and finall, after 5krd and 37mins in the water, I dragged myself up the public slipway at Blackrock. 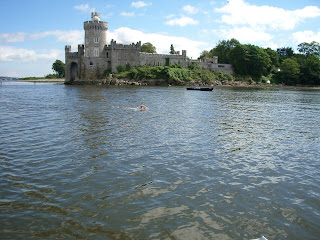 Once I managed to stand up, three warm towels were wrapped around me and I lay down on the concrete and closed my eyes. I was exhausted, my tongue was swollen and I was bloated all over. It felt good to just lie there in the sun doing nothing. When I opened my eyes my family were there and a reporter and photographer from the Evening Echo. I answered a few questions for the repoerter and stood in for a photograph, then wolfed down as much food as possible and washed it down with a hot cup of tea.

When I eventually managed to get off most of the lanolin, I put on my clothes and sat into the car. We went back to Monkstown to get our stuff off the boat. When we got there I suddenly realised that my bladder was about to explode, luckily I had enough change for the upblic toilets on the pier and I managed to relieve myself of nearly a gallon of High5.

When we got home I had a nice sit down on the river bank while the others had their swim. The next morning, it was back to school as normal. I nearly fell asleep a couple of times but I managed to get through the day. The whole thing was finally over after a very easy 1500m swim in the Blackwater.
Posted by Owen O'Keefe at 19:54