This year's Lee Swim was held on Saturday 19th July. There was the usual excitement on the boardwalk of the Clarion Hotel in Cork City before the race. After Ned had made his safety briefing, we started to walk towards the start area at the Old Distillery Yard. About halfway up the course a harbour seal was spotted in the river showing off his freshly caught salmon to the crowds on the bank. I was starting in the first group where there was the most competition. When the clakson sounded we dove in to the water and it was a mad dash to get into the leading pack. I eventually settled in next to Gerard Mangan, a fast pool swimmer from Sunday's Well. I knew that if I could stay with him, I would be in the early finishers. 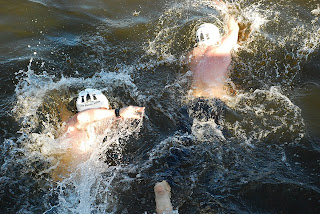 It was neck and neck until we came to the Port of Cork sign where we turn for the upstream section. Ger was able to take a tighter turn around the corner and hug the bank where there would be less current. because I was further out into the centre of the river I was suffering more due to the current. From the last bridge it was an all out sprint to the finish. At the touch-pads I finished just eight seconds behind Ger. When we finished there was noone else around so we thought we finished first and second. But when we went through the showers there were two swimmers infront of us. They were; Chris Bryan of Ennis and Shane Drumm of ESB(Dublin). Still, I was relieved to have finished before Ned Denison. There is always great competition between us at races.

After the race the sun was shining and there was a great atmosphere on the quay-side. Everybody was enjoying themselves and it was a great opportunity to meet past Channel swimmers, most recently Finbarr Hedderman of Ballincollig, and other Channel aspirants, including three other swimmers from Cork who are signed up to swim on the same tides as myself. Then, it was up the the Pegasus Suite for the prize-giving. After a few not-so-long-winded speeches, it was time for the prizes. The overall winner was Chris Bryan, and the winner of the women's race was Jullie Ann Galloway from NAC Masters, who is signed up for an English Channel Solo next year.Two medals came home to Fermoy that night, the first was my gold medal for my category of Male Non-wetsiut 12-18yrs, and the second was Leo Bartley's bronze medal in his Male Non-wetsiut 60-64yrs. Overall times were faster than last year for everyone. But I was still surprised to see my time of 24mins 38secs, nearly 4mins faster than in 2007. All in all, it was a great day and I look forward to next year's.