Last Sunday saw the second annual Blackrock to Cobh Swim take place under beautiful sunshine. This year Fergus Galvin organised the swim. The course measures over 12km but due to a strong tidal push, the actual distance swam is much less. The swim starts from the slipway in Blackrock, quickly passing the Blackrock Castle Observatory and into Lough Mahon(boring), then it turns south into the Passage West channel(strong tidal assistance), around the Cork Dockyards and into the town of Cobh. 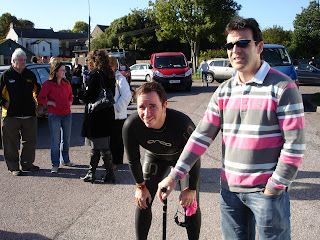 On the morning of the swim the sun was shining and the water was a balmy 14 Celsius. Due to some wind there was some chop on the Lough and out in the Harbour. However, as the swim progressed the conditions improved. The start of the swim was delayed by the late arrival of two large Japanese trawlers and a small cargo ship. Once the boat traffic was clear we got the go-ahead from the port authorities to proceed with the swim. 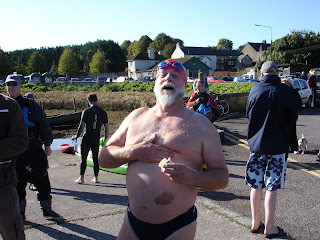 Mike Harris and Róisín Lewis started on go, followed by more swimmers on 10mins, more on 20mins and finally myself, Julianne Galloway and Colm O'Neill, North Channel Swimmer, on 30mins. From the beginning the assistance from both the river and the outgoing tide were noticeable. Almost immediately we passed the impressive Blackrock Castle jutting out into the river, then it opened up into the vast expanse of Lough Mahon. Here I managed to pull ahead of Colm but Julieanne was steaming ahead. This section of the swim was very long and drawn out, the monotony broken only by the occasional passing ship and one feed of High5.

Once the corner of Cobh Island appeared in front, I knew that we were getting close the Passage West. Once we rounded the corner we were flushed down the Channel passed Glenbrook, the Rushbrooke ferry and into Monkstown. I followed my tactics of keeping a wide corner around the Dockyards so as to avoid the eddies and avail of the current. However, a marauding tug-boat put that plan to bed and I was forced to take a tighter line around the final corner. 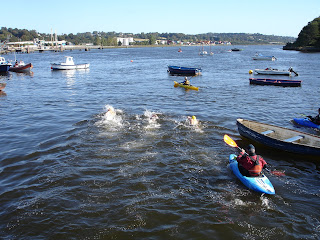 Once Cobh Cathedral was in sight I searched below for the line of blue barges and tugs where I knew the finish was. I sighted the entrance to the finish area and put my head down and swam hard. I could see that I was making good progress as the Cruise Terminal and train station flew by. Between the last two tugs we tuned in to the little alcove to finish. All that was there was very high walls and a long flight of steps to the top. After a long swim there is nothing more relieving than a good flight of steps to climb.

There were lots of people at the finish, as there always is in a seaside town on a sunny Sunday afternoon. Once I managed to haul myself to the top of the steps I got dressed, the sun made this a whole lot easier. Once dressed it was great to watch the other swimmers finish. Last in was Mike Harris, this was a big swim for him, he seemed quite disorientated at the finish. When I went to congratulate him on finishing his only words were, "Come back in another fifty years and you try it!" 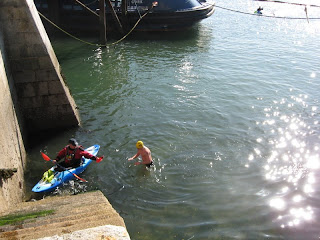 Thinking back on the swim, I realise how important it is to know the course. Although I had Donal Clancy, an excellent kayaker, with me I still had to have my own ideas which made the swim alot easier. Last year I did crewing for this swim. I learnt alot that I was able to put into practise this time round. For example, I knew that it was not a good idea to stay in close to land when rounding the last corner just after the Dockyards, last year, lots of people got caught in a negative flow here and made very little progress. Also, I knew exactly where the finish was for the swim, most people would not have had a clue as it was a very unusual spot, I was able to make a good line for the finish from the last corner. 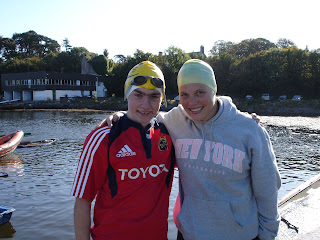 There was also a great gathering of swimmers at this event. Julieanne Galloway drove down from Dublin that morning and still managed to finish in under 2hrs 15mins, she is signed up for the English Channel next year. There were also two other Cork swimmers there who are signed up to swim the Channel on the same week as me, Lisa Cummins(who feels no cold) from Sunday's Well and Sylvain Estadieu. Colm O'Neill from Dublin was also there, he swam the North Channel a few years back and also Charles Harper, who one the Liffey Swim and is swimming the Channel next year.
Posted by Owen O'Keefe at 17:19