This year proved to be another fantastic Lee Swim. The swim was first held in 1914 but was later relocated and eventually suspended due to the bad water quality in Cork City and the outer Harbour. It was resurected in 2005 when Cork celebrated it's year as the European Capital of Culture. Everybody was amazed at the great improvement in water quality since the City's new drainage system was put in place and now the swim has become the largest open-water event in the country, with people travelling from all over the world to participate. This year a record number of 279 people took part. 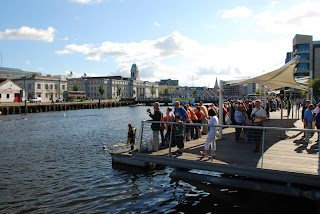 I first did the swim in 2006. It was my first big open-water event and I was only 13 years old. Myself and my friend Bryan Dillon had spent the first half of the summer training for this swim which we thought was very long and was going to be really scary. That year we placed reasonably well and got hooked on open-water swimming, doing the Sandycove Island Challenge that September. In 2007 I was taking swimming fairly seriously and set myself the challenge of beating Ned in the Lee. I did beat him then but lost out on the Island Challenge that year. That September Ned and Danny Coholan (EC Soloist) took me on my first Speckled Door to Sandycove 5km swim. Being the youngest to ever do it it got alot of attention and gave me great confidence. Within a month I had booked my English Channel Swim.
In 2008 I was determined to do as well as I could. I beat Ned in the Lee and finished 4th overall. I also did the Lizard Point swim, Loch Allua, Crosshaven to Blackrock and Blackorock to Cóbh in that year and came second in the Island Challenge. Oops, I started rambling... Let's get back to the Lee Swim! 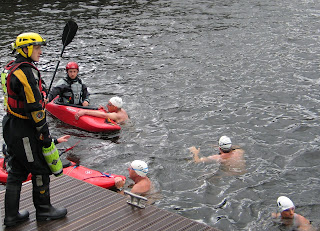 This year was another fantastic Lee Swim, even if it was rainig for most of the day! After a bit of a slow start, I surprised myself and managed to climb back up to finish in second place. I never would have thought in 2006 that I would be coming 2nd in the Lee Swim. I finished in 23mins 17secs which I was absolutely delighted with, I was thinking that 25mins would have been very good. As usual everybody really enjoyed the day. There was a great surprise afterwards when there was a real game of proper water-polo played in the River infront of the Clarion Hotel. At least this kept us some way occupied while the results were being done manually due to a technical fault with the electronic timing! 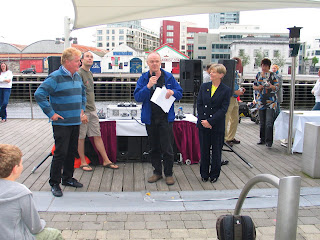 Joe Donnelly has to be crongratulated for his excellent work for resurecting this swim and making it such a great success every year. It is not easy running an event like this with so many participants and spectators! Thanks Joe........!!! Also, well done to the overall winner, Shane Drumm of Aer Lingus SC and the winner of the women's race Maeve Linahen fo Mallow Swans SC, also well done to Harry Cohen, 12yo, who travelled from London and was the youngest participant in the swim.
I really can't wait for next year's Lee Swim!
Posted by Owen O'Keefe at 12:05