Ned and I started ours swim in the pitch dark at 4:09am underneath the Port of Cork sign in Cork City Centre. This was my first ever night swim and I have to say I found it very relaxing... Apart from a few bits of floatsome and jetsome, which is to be expected in the River Lee. For safety we had all our light-sticks on and the boat had their navigation lights on. On the boat was Dave Mulcahy and Kieran O'Sullivan, both did a fantastic job at keeping us on course in the difficult conditions. 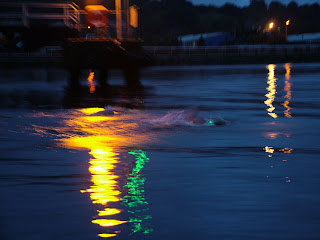 As we swam past Blackrock Castle it was starting to get bright... It also however started to get a bit choppy and started to lash rain on Dave and Kieran on the boat. The water was warm and I was feeling very comfortable so actually felt sorry for the boat crew getting drenched, I'm not really sure how Ned was feeling. After a few feeds we had passed Glenbrook and Ned said that he was getting out at Monkstown... There was no arguing and he exited the water at 2hrs 54mins and then crewed for the rest of the swim.
Passing infront of Hawlbowline Island, the Irish Naval HQ, and Spike Island, former prison, it started lashing rain again. After that it got a bit calmer and a fog rolled in. On our way from Cóbh to the Mouth of the Harbour, we ran into some trouble with the Port Authorities which we won't mention. Apparently all of our names went on to some report! It wasn't really our fault though......out-dated technology. 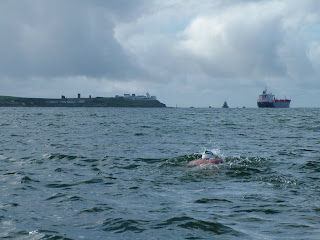 The water was still warm as we exited Cork Harbour. Now instead of a choppy surface, I had a large rolling swell to contend with. Aside from sore shoulders from fighting the waves for the last 5hrs and one jellyfish sting, I was feeling very confident and upped the pace a bit because I knew the end wasn't too far away. For a while I kept looking up for some reason but Ned stepped in and corrected that!
After the boat ran out of orange flavoured High5 to give me they gave me an unflavoured one and mixed it with blackcurrant juice... It wasn't too bad. After that Ned said that it was the last feed and I had 1km to go (although I'm sure it was more than that). At 9:56am I walked up the beach in Myrtleville feeling very happy with myself. I had estimated that the swim would take about 7hrs but I beat that by over an hour so I was delighted.
Here is a picture of the swim course: 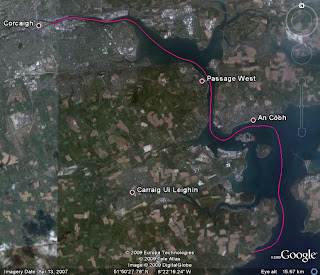 Sorry about the delay in posting it properly...!

Amazing to see the route on the map, Owen. Had no idea it was so long! Well done, Michael.