Well, home at last. I left for Castlepollard, Co. Westmeath on Saturday afternoon with my Mam, Dad and small brother. The drive up was fairly uneventful; we bypassed Mitchelstown (I won't make any smart comment just in-case) so it was motorway all the way to Cullahill, a few tailbacks in Abbeyleix and Portlaoise and we were there in three and a half hours.
Our hotel was very nice, the owner was a very funny woman. That night I had a nice 16oz T-bone steak with onions, mushrooms, pepper sauce and a bowl of chips followed by a good slice of hot chocolate fudge cake and a scoop of ice-cream. You need to eat lots the day before a swim! Dave, who was doing the 5km swim, and Brigid arrived with the two boys later.
Then on Sunday morning we headed out to the lake. It was a scorcher of a day and there was no wind so I was expecting to do a good time for the 10k. The 15k swimmers were just heading out as we arrived. It was a beautiful place and the water was quite warm. I caught up with a few more Channel aspirants, including Julieann Galloway (very fast), before eventually managing to register for the swim.

When we finally got into the water I was pleasantly surprised... It was quite warm and it was a beautiful clear lake, though it was a pity that everything was carpeted in those terrible zebra mussles that found there way in on the bottom of boats. After a bit of waiting around in the water, the clackson sounded and the race was on. 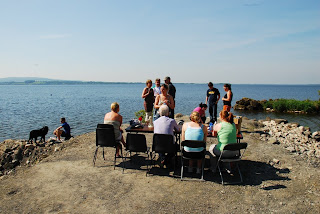 Right from the start Julieann was out in front and I was behind her in second. For the first lap I was able to navigate by watching her kayak. But by the second 2.5km lap, she was too far infront and I could see nothing. About half way through the second lap I stopped and took off my goggles. I had a look around and coul only see one boat in the distance, so I swam for that as I thought that was probably where the turn buoy was.

When I got to the turn buoy (which wasn't much bigger than a milk bottle) I decided that this was my last lap and found my way back by heading towards the hotel up on the hill. When I got out I was really annoyed that I hadn't been able to finish ust because the course was so poorly marked and I had no kayaker. I felt strong and not a bit cold. As you can imagine I was pretty pissed off so I just went over to the car for a while to calm down!

After I'd had a shower and got dressed I just relaxed at the side of the lake and tried to forget about the whole thing. I was thinking all sorts of things like "how hard can it be to find ten kayakers?" and "why were there only three gallon bottles marking a 2.5km lap on an open lake?". I know it sounds like I am trying to blame anything but myself, but I was genuinly annoyed about the whole thing, I really could have done the 10k. 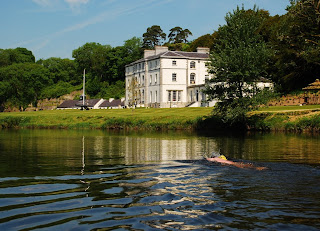 Afterwards I found out that lots of people did the same thing as I did so I didn't feel like the only awkward customer... When Dave finished his 5k, we worked out that he had actually swam about 7k as a result of the course! When we got home I was finally bale to forget about it and move onto orgainising the Blackwater Swim on 6th June. The next day I did an 8k swim in Fermoy... pic above.
Posted by Owen O'Keefe at 15:54