Oops... I almost forgot I had a blog!

Ok, it has been a fairly long time since my last post. Firstly, on New Year's Eve there was a charity swim in Garryvoe in East Cork. One of my friends who goes to Coláiste an Phiarsaigh in Glanmire is going to Kolkata(formerly Clacutta) later in the year with the Hope Foundation. He and a few others decidi to run a charity swim in Garryvoe to raise funds for the trip. 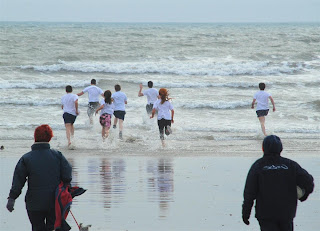 There was a good crowd turned up. Even with all of the planning, one important detail was forgotten, the tide, wich if you get it wrong in Garryvoe means that you have a long trudge out to swimmable water. It was windy and rough, but the swim was very enjoyable. I say the "swim", for most people it was more of a splash and dash event. Except for Maria Sheehan who managed to stay in for a minute or two. I managed to do 11mins 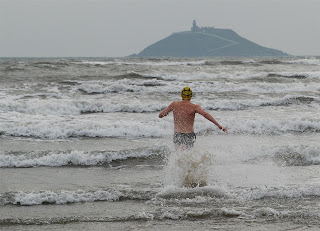 after the horrible twisting injury I did to my knee on entering the water. The beacjh is covered in little craters and it's easy to fall into them when they are submerged. Alltogether it was a nice event to pass away New Year's Eve and to raise money for charity.


Also, last weekend my family went to Dublin for my Dad's birthday. While we were there I decided that it might be a good idea to go to the National Aquatic Centre. I got to have a good swim in their 50m, 10-lane Olympic sized pool and later I went with my brother and sister to the leisure part of the Centre. The 50m pool was fantastic, and I didn't get stuck behnd lots of slow people and have to turn every 20secs! Since I am still a child I get to enjoy things like waterslides, and the NAC had really good ones! I also got to try out the "flow-rider", a kind of artificial wave for boarding on. It's a bit tricky at first but once you get the hang of it it's great fun.


The NAC is a truly magnificant faclilty, it's a sort of Croke Park of Irish swimming. I do hope that it survives long enough for everyone to enjoy it. And I promise, it won't be too long before my next post!
Posted by Owen O'Keefe at 19:05